Here are two more comics in the Minecraft Mini-Comics series by KFP. You don't have to understand anything about Minecraft to enjoy them!

You can click on the images to view them larger. A text version is underneath them. 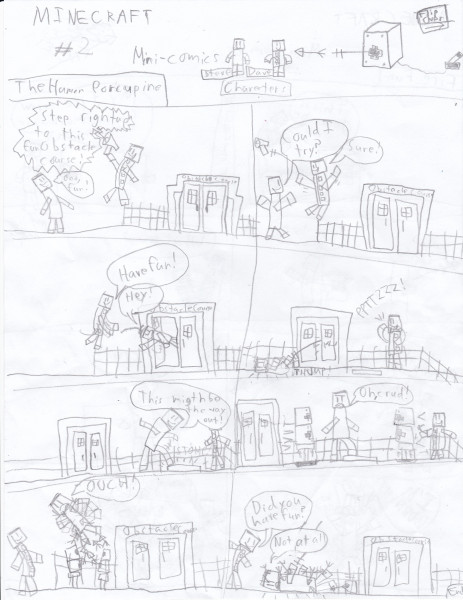 Block 1: Dave, a guy wearing a four-button shirt, stands on top of a fence yelling through a bullhorn, "Step right up to this fun obstacle course!" He is standing in front of two doors that say, "Obstacle Course." Steve, an ordinary guy in a plain shirt, looks at Dave and says, "Ooo, fun!"

Block 2: Steve asks, "Could I try?" And Dave answers "Sure!" and ends up throwing the bullhorn out of view as he throws his arms up in the air.

Block 3: Dave tosses Steve through one of the doors and says, "Have fun!" and Steve says, "Hey!"

Block 4: Steve lands on the ground with a "thump" as the door closes behind him. Dave teases Steve with a raspberry sound, "PPTTZZZ!"

Block 5: Steve sees a pressure plate on the ground and stomps on it while he says, "This might be the way out!"

Block 6: He realizes that stomping on the press plate caused two pistons to push dispensers out of the ground with a "VVVT" sound. He looks at the reader and says, "Oh, crud!" Dave is watching from the sidelines with a big grin on his face.

Block 7: The dispensers shoot a lot of arrows at Steve, which ends up flinging him into the air. Steve flaps his arms like crazy and says, "Ouch!" Dave watches with a smile on his face.

Block 8: Steve lands on the ground, covered in arrows, and Dave asks, "Did you have fun?" Steve replies, "Not at all."

And now for another Minecraft mini-comic, "Fire Fun." 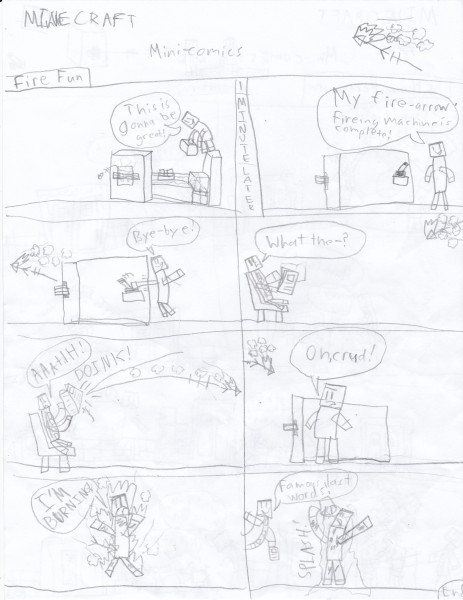 Block 1: Steve, an ordinary guy in a plain shirt, is covering up a small circuit of wires and moving parts, which includes a small container holding lava. He says, "This is gonna be great!"

Block 2: One minute later, Steve is standing next to this rectangular prism-shaped structure with a hole at one end and a lever near the other end. Steve says, "My fire-arrow firing machine is complete!"

Block 3: Steve flips the switch and says, "Bye-bye!" as a flaming arrow flies out of the hole in the machine.

Block 4: Dave, a guy with a four-button shirt, is sitting in a reclining chair reading a book. He glances up and sees a flaming arrow flying towards him, which just so happens to be the same arrow that flew out of Steve's machine. Dave says, "What the.--?" as he sees the arrow approaching.

Block 5: Dave screams, "AAAHH!" and holds his book up like a shield. The arrow bounces off his book with a "DOINK!" sound.

Block 6: The same flaming arrow that bounced off Dave's book is now heading towards Steve, who looks at the arrow approaching him and says, "Oh, crud!"

Block 7: When the arrow hits Steve, it lights his clothes on fire, and he screams, "I'M BURNING!"

Block 8: Dave, still holding his book, pokes his head into view and says, "Famous last words!" as Steve dumps water on himself with a "SPLASH!" His clothes are now covered in ashes.